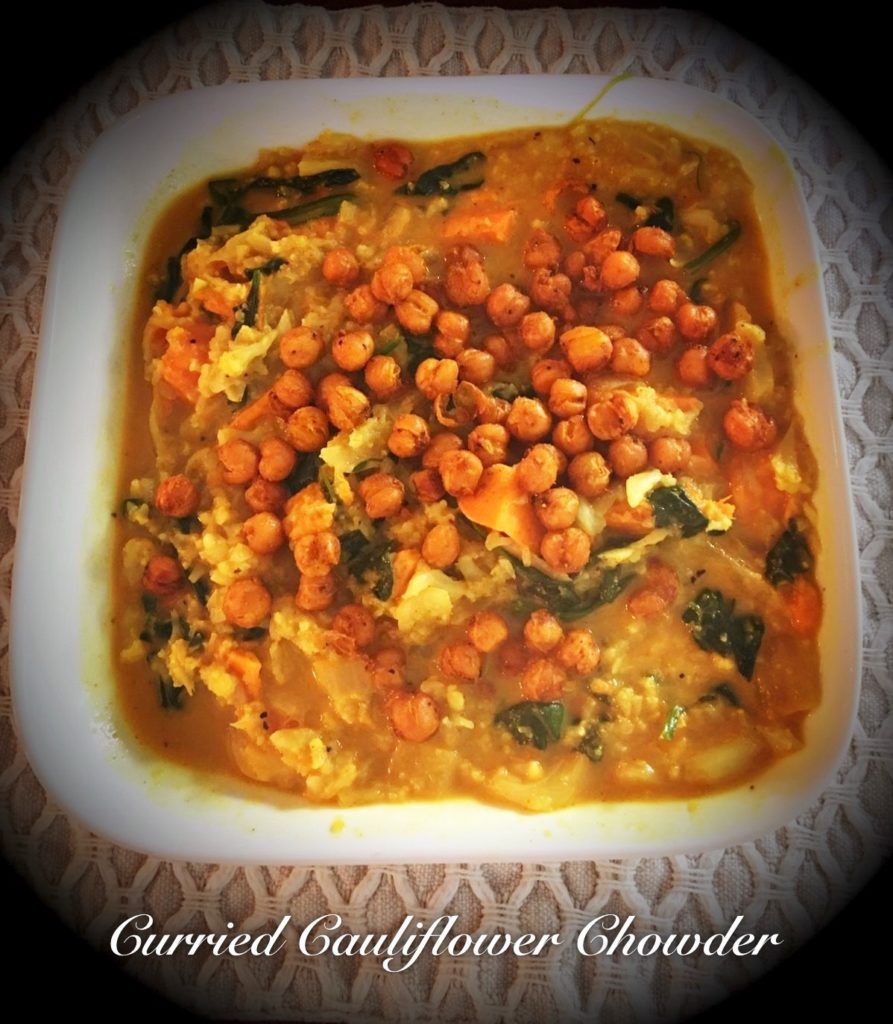 The other day my “sister in law”, Laurie Hancox and I were visiting with my daughter and our special step mum, Joy. Laurie had just arrived from her home in California and I was excited to see her.

Laurie brought us some samples of the most delicious curried cauliflower chowder I have ever had and I simply had to get her recipe. “There really isn’t a recipe” Laurie said, “but I got the idea from a friend who loves to make soups.” We scribbled it down the ideas Laurie had used on a piece of scrap paper and the rest is history!

Originally the recipe called for milk and flour but we both thought that we could switch out the dairy for coconut milk and could probably get rid of the flour all together as the soup broth was super thick with just the vegetables.

Instead of regular croutons Laurie thought that she would try her hand at making croutons out of roasted chick peas. Apparently these gluten free “croutons” were her family’s favourite part of the recipe.

I probably should call this recipe Curried Cauliflower, Sweet Potato & Spinach Chowder with Chick Pea Croutons but I thought that the title might be a bit long LOL.

This Curried Cauliflower Chowder would make a perfect simple weeknight supper. It tastes even better the second day,  if you have any left! 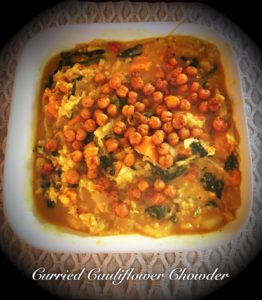 1 can Coconut milk (use regular or light for less calories)

Salt and pepper to taste 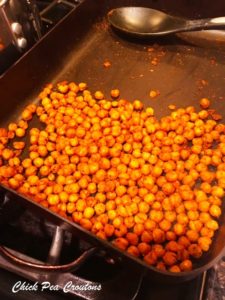 Steam 1 head of cauliflower in a large Dutch oven. Once cooked, remove from stove and drain water remaining.  Place in a large bowl. Mash until the cauliflower is in small pieces with a potato masher.

In the same Dutch oven, sauté the chopped onion and garlic in olive oil until onion is translucent. Add curry, cumin and coriander and stir until well blended.

Drain and rinse 1 can of Chick Peas into a medium sized bowl. Toss them to coat in Olive Oil, Cumin, Turmeric, Salt and Pepper. On a large baking sheet spread out coated Chick Peas. Roast for 30 minutes. Remove from oven and cool slightly before topping the Curried Cauliflower Chowder. Yum!