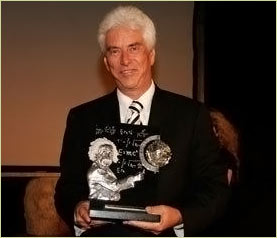 Joining a pathology group in Peoria, Illinois, Dr. Wentz served as infectious diseases specialist and directed the microbiology and immunology laboratories for three hospitals in the Peoria area. After three years of clinical experience, he saw an opportunity to make a deeper contribution to medical science by developing much-needed tests for viral diseases.

Dr. Wentz launched Gull Laboratories as a one-man operation in 1974. By June of 1977, several of his viral diagnostic assays were FDA-approved and ready for marketing to hospitals and clinical laboratories. He developed the first commercially available test for diagnosing infection with the Epstein-Barr virus.

The Roots of a Productive Life

“My father died when I was 17,” recalls Dr. Wentz,. “It was one of the most traumatic events in my life. I so much wanted his approval and I may, in a sense, be compensating for his loss even today. And yet, like other teenagers, I felt I hadn’t taken enough time for him. When he died, of course, it was too late. I think that put a mark on me that I was denied a father at a young age.”

Dr. Wentz saw degenerative diseases claim other members of his family. With only a few exceptions, he watched cancer and heart disease claim his many aunts and uncles on both sides of his family. Even his mother had her challenges. She was diagnosed with breast cancer in her 60s and went through surgery, radiation, and chemotherapy. “She was a fighter, though, a real survivor,” Dr. Wentz says. “She wasn’t about to let cancer and its therapies kill her early.” Cancer took a further toll on the family when it claimed his older brother Charles, at age 66. “Degenerative disease is definitely a problem in my family,” he states. 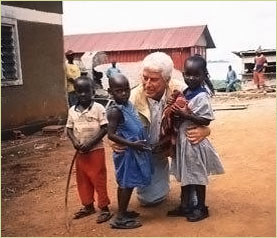 Different people handle problems in different ways. Some surrender to them. Others deny or hide from them. And then there are those who make a personal commitment to fight their problems and beat them. Dr. Myron Wentz is one of the latter. He made it his life’s work to meet degenerative diseases head-on and do everything in his power to conquer them.

“Back at the turn of the 20th century, the five leading causes of death were all infectious diseases,” Dr. Wentz says. “The epidemic of degenerative diseases had developed throughout the last century and continues today.” The fact that his own health seemed to be deteriorating under the stress and pressure of his work cemented his resolve.

In 1992, armed with a unique depth of cell-culture expertise, as well as a strong belief in the importance of cellular nutrition, Dr. Wentz created USANA and its now-famous family of nutritional products.

In a world of pharmaceutical and surgical “solutions” to cancer, heart problems, and other degenerative diseases, why did he choose nutrition as the weapon with which to confront the giant? “I became convinced that the single most effective thing we could do to promote optimal health was to give our bodies proper nutrition,” he explains. “To resolve the essential nutrient deficiencies of our modern diet and counteract the free radical damage from our toxic environment that is overwhelming our antioxidant defense systems.”

That same realization has come to many people based on many different levels of understanding. But Dr. Wentz insights into nutrition came from the most basic level of all: the individual human cell.

“In order to develop the best viral assays for Gull, I had to develop the best viral antigens,” he states. “But viruses need host cells to reproduce. You can’t grow good viruses unless you can grow healthy, fully functioning cells. I found that by giving human cells proper nutrition, I could keep cells healthy indefinitely, with no evidence of degeneration or disease. Through nutrition, I could ensure that the cells were kept at their optimal health.”

Dr. Wentz’ work in developing a refined nutritional system to keep laboratory cells healthy led him to a firm conviction: “The principles of good nutrition are universal. If we can nourish the human body in a comprehensive way on a daily basis with the full spectrum of essential nutrients in the right forms, amounts, and in the proper balance, we can sustain long-term health and effectively avoid degenerative disease. Health, after all, must begin at the cellular level.”

Never has optimal nutrition been more critically important than in today’s society. “In fact,” he states, “the skyrocketing amounts of free radicals that are being generated from the toxins that we have created in this century, the synthetic chemicals, drugs, pollutants, stress, and so on are overpowering our dietary sources and innate production of antioxidants. The body’s antioxidant systems cannot stop the chain-reaction of excessive free radical activity that barrages it day in and day out.

“That’s why we need better nutrition than our grandparents and our parents had. We need doses of natural, dietary antioxidants that are far larger than what the government has established as recommended daily amounts. We need supplements because our bodies require more of these nutrients than we could possibly get in our foods. When I introduced the USANA nutritionals, other medical and nutritional scientists told me I was extremist; they thought the megadose amounts in the formulas would be toxic. After just a few years and seeing the results, those scientists now agree I was right.”

The rapidly growing family of people who claim that its products have changed their lives, stand as witnesses to the verity of Dr. Wentz’ ideas and to the effectiveness of the nutritional tools he has brought to the world.

Driving Hard to the Finish Line

In the final analysis, it is his dream to help people live longer, healthier lives that drives Dr. Wentz so relentlessly. Such a pace could be attributed to an unusually high level of energy. But Dr. Wentz attributes it to something else: an urgent sense of mission. “I have always felt that the time is too short for me, that life is too short for what I feel I need to get done,” he says. “I was too late to help my father. I was too late to help my mother. But I think I am making contributions that are now allowing people to live the way they were intended to live: in health. I think I am helping people live their lives to the fullest without having them cut short by premature death or illness.”

When the sun sets each day, Dr. Wentz interrupts whatever he is doing, walks outside, and stands facing the sun in silence. It is a personal ritual. “I’ve never really thought much about it,” he says. “I take that time to meditate and reflect. I assess what I have been able to accomplish that day and determine whether I am pleased with it. I ask myself whether I have done all that I could. I think about what still remains ahead for me.”

In addition to Gull Laboratories and USANA Health Sciences, Dr. Wentz created Sanoviv Medical Institute, a holistic medical facility with full hospital accreditation located in Baja California. In recent years Dr. Wentz has turned his attention to charitable and humanitarian concerns, founding the Wentz Medical Centre and Laboratory in Uganda and the Wentz Medical Centre in Cambodia to serve children in those countries orphaned by diseases such as malaria and HIV. In 2006 Dr. Wentz was a recipient of the Children’s Champion Award, presented by the Children’s Hunger Fund, for which he travels worldwide as a medical missionary. In 2007 Dr. Wentz was honoured with the Albert Einstein Award for Outstanding Achievement in the Life Sciences.

While Dr. Wentz’ primary focus is on health and disease prevention, his love for music and his generosity have made possible the Wentz Concert Hall and Fine Arts Center at North Central College in Naperville, Illinois. LiveWell Consulting is thrilled to have Dr. Myron Wentz as their medical partner.