Founded in 1992 by microbiologist and immunologist Dr. Myron Wentz, USANA Health Sciences is a science-based company that develops scientifically advanced nutritional, personal-care, and weight management products. The name “USANA” derives from Greek and Latin and means “true health.” USANA was founded with a mission to manufacture the highest quality products without compromise, products that people can trust. Because poor manufacturing can destroy great science, USANA is one of the few companies to manufacture most of its products in its own state-of-the-art facility. To ensure that the formulas developed in USANA’s laboratories are produced consistently, the same process is followed each time manufacturing begins. When raw ingredients first arrive at USANA, they are immediately quarantined until they are tested for purity, potency, and quality. If an ingredient fails to meet set standards, it is rejected and returned to the supplier. 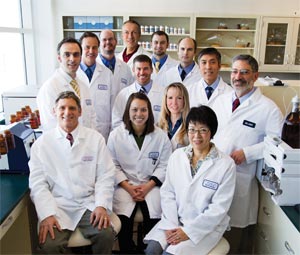 As the tablets are being manufactured, they are tested for hardness, thickness, disintegration, fragility, and weight uniformity. An inappropriate thickness can indicate an imbalance in ingredients, just as a slight variance in compression can result in tablets being too hard to disintegrate in the stomach, or too soft, causing them to break apart in the bottle. Before packaging, the final product is tested once more for potency and purity. After the products are packaged, the foil seals, labels, and cotton are double-and triple-checked by both machines and people. Each step in the quality assurance process is accompanied by a written, detailed procedure.

Every dietary supplement produced by USANA carries a potency guarantee, which ensures that what is stated on the label is actually contained in the product. The foundation of USANA’s nutritional system is the Essentials™, a comprehensive vitamin, antioxidant, and mineral dietary supplement that contains more than 40 active ingredients and extracts, far more than the 24 vitamins and minerals commonly considered to be adequate. The Essentials (Mega Antioxidant and Chelated Mineral), Proflavanol® 90, and the HealthPak™ AM/PM packs have been exhaustively tested by NSF International and have been found to contain all ingredients at the labeled amounts. NSF is an independent, not-for-profit organization that helps protect consumers by certifying products and writing standards for food, water, air and consumer goods.

Currently, the Food and Drug Administration has not finalized Good Manufacturing Practices (GMP) for dietary supplements, as they are required to do under the Dietary Supplement Health and Education Act. Rather, Congress has initially stated that dietary supplement GMP should be modeled after foods. Because of this statement, many supplement manufacturers have chosen to follow GMP for foods. USANA, however, voluntarily follows GMP for pharmaceuticals as the basis for its quality assurance program in the manufacturing of all of its products, meaning USANA treats nutritional supplements with the same care that goes into the manufacturing of pharmaceutical products.

Similar to guidelines in many other countries, pharmaceutical GMP are federally mandated guidelines for the production of over-the-counter drugs; they are considerably stricter than the food GMP followed by many United States supplement manufacturers. Pharmaceutical GMP cover virtually every aspect of drug manufacturing, including facility design and maintenance, raw material specification and control, supplier validation, product design and testing, employee training, process control, finished product release, and complaint handling.

In several countries around the world, supplements are more highly regulated than in the United States. In Australia, for example, the Therapeutic Goods Administration (TGA), which regulates dietary supplements, mandates that manufacturers follow a set of GMP identical to pharmaceutical GMP in the United States. As an Australian supplier, USANA is regularly inspected and audited by the TGA to ensure that we meet their GMP standards. Most recently, USANA was audited in June 2006 by the TGA and passed with ease.

Aside from meeting the criteria of regular TGA audits, USANA has voluntarily obtained additional third-party verification of GMP status. Most recently, USANA’s Salt Lake City, Utah, manufacturing facility has been certified to be in compliance with GMP requirements set forth in NSF/ANSI Standard 173-2006, Dietary Supplements by NSF International. According to NSF, “GMP registration reflects [a] continued commitment to ensuring quality and satisfaction and gives companies confidence that their organization operates in conformance to established GMP.” It is USANA’s mission to develop and provide the highest quality, science-based products. By rigorously testing each product for potency and purity and by voluntarily following pharmaceutical GMP, USANA sets the standard for excellence in dietary supplement manufacturing. Once again this is proof that USANA products are truly Nutritionals You Can Trust.

USANA is committed to the highest standards of product design and manufacturing, and we guarantee the potency of every nutritional product we sell.

Our company follows internationally accepted Good Manufacturing Practice (GMP) set out for the pharmaceutical industry. As such, we track every detail of product manufacture from start to finish—from the verification of raw materials to final testing of finished products. Standard tests include those for potency, purity, disintegration, weight, hardness, thickness, and stability.

For these reasons and more, you can be confident in the potency and overall quality of USANA Products. We truly provide Nutritionals You Can Trust.