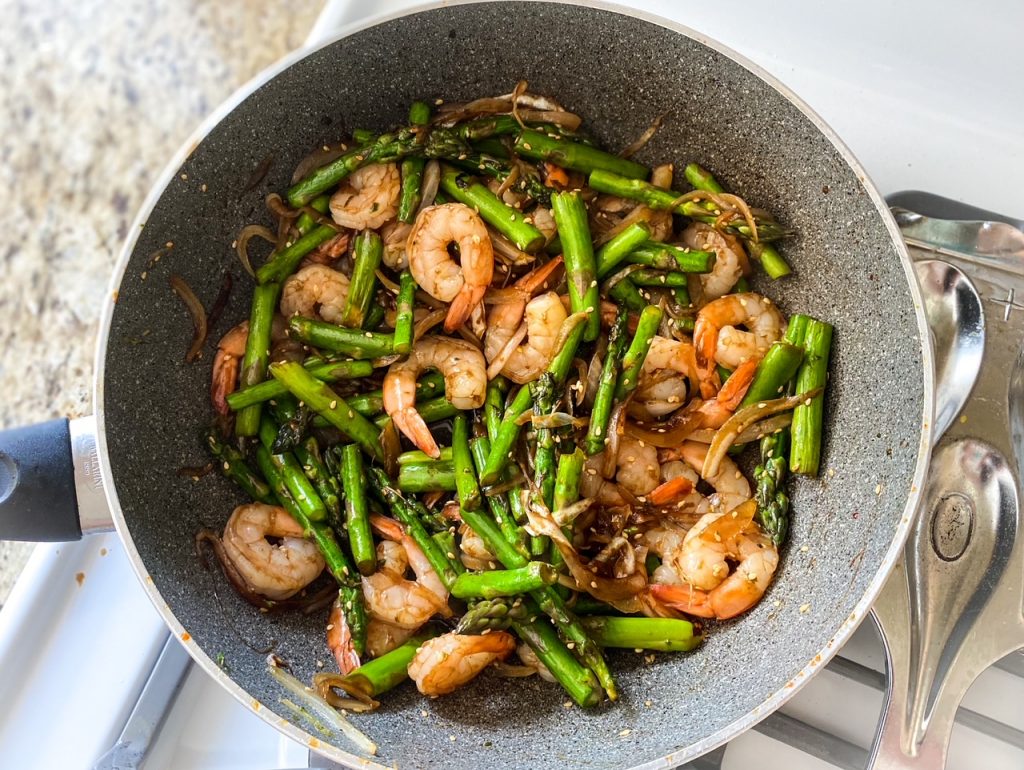 One of the dishes that my mother in law has cooked for special birthday’s has been her Sesame Shrimp & Asparagus. I love both shrimp and asparagus on their own but paired together, I think they are divine.

I asked her for the recipe a few years ago & made it the other night, with a couple of healthy changes (lower salt & no gluten). It turned out to be a delicious meal that we all enjoyed.

Originally this was served over some flavorful rice but I served it with baked cauliflower as a side dish & we were happily replete (i.e. stuffed). I think it would also be awesome served over cauliflower rice.

This is actually a really easy recipe to make but the key is to have everything prepped before you start cooking.

In terms of the sesame seeds, I am not sure if you share similar memories as I do as a little girl but some of my best revolve around sesame seeds & a famous Chinese restaurant in Vancouver, BC called Mings.

My cousin, Tessa was having a special birthday party and all her special friends and cousins were invited to the party at “Ming’s”. Now you have to understand that Ming’s was the most prestigious Chinese restaurant in all of Vancouver (and Vancouver had a lot of great Chinese restaurants). I was thrilled to be invited, and without my parents too!

Once we arrived at Tessa’s birthday we were ushered into a beautiful round table with crisp white table clothes and servings in beautiful blue china at every place. As I was seated, I noticed a small bowl of toasted sesame seeds on every place and a tiny bowl beside, for soya sauce. Of course we all were given chopsticks and pretended that we knew how to use them.

Suffice it to say that to this day I am in love with toasted sesame seeds and blue china.

In a 12 inch skillet toast sesame seeds till they are golden and set aside in a small dish.

Heat oil in deep pan and sauté onions, asparagus and shrimp until shrimp is pink and the veggies are tender, bright and crisp. (Approximately 5 minutes).

Heat your plates and serve over rice or cauliflower rice.  If you choose baked cauliflower as a side dish you do not have to serve over anything else.